Inside the Haunting Obsession That Inspired Lucy in the Sky

Inside the Haunting Obsession That Inspired Lucy in the Sky

In Lucy in the Sky, she plays a married astronaut who, upon her return to Earth after a mission, has an affair with a fellow astronaut, played by Jon Hamm, and becomes increasingly unhinged when he moves on to someone else.

But that’s a reminiscent outline of what happened to Nowak, an accomplished NASA astronaut who in 2007 packed her car with the sort of items that would raise suspicion, put on an adult diaper—the kind the astronauts wear in space—and embarked on a 950-mile drive to confront her ex-lover’s new girlfriend.

Nowak’s fate, as far as eternal notoriety goes, was sealed the second the word “diaper” was brought up as the disturbing “astronaut love triangle” story unfolded. Which is another reason why Lucy in the Sky director Noah Hawley didn’t want to make a mockery of his troubled lead character by hewing too close to the specifics. Moreover, the production wasn’t working with the rights to Nowak’s life story.

“There are no diapers—no diapers were harmed in the making of this movie,” Hawley told E! News at the Los Angeles premiere of Lucy in the Sky. “It’s not that story. The script came to me as a fictionalized story that didn’t have that element in it. It never occurred to me to put that element in it. I think the danger of re-humiliation when someone’s worst behavior has been so public, there’s no need for us to hang a lantern on that detail. That’s not what the film is about.”

Brian C. Brown, who co-wrote the screenplay with Elliott DiGuiseppi, told us at the premiere, “This was a story we wanted to tell, even if we were just telling it to each other.” 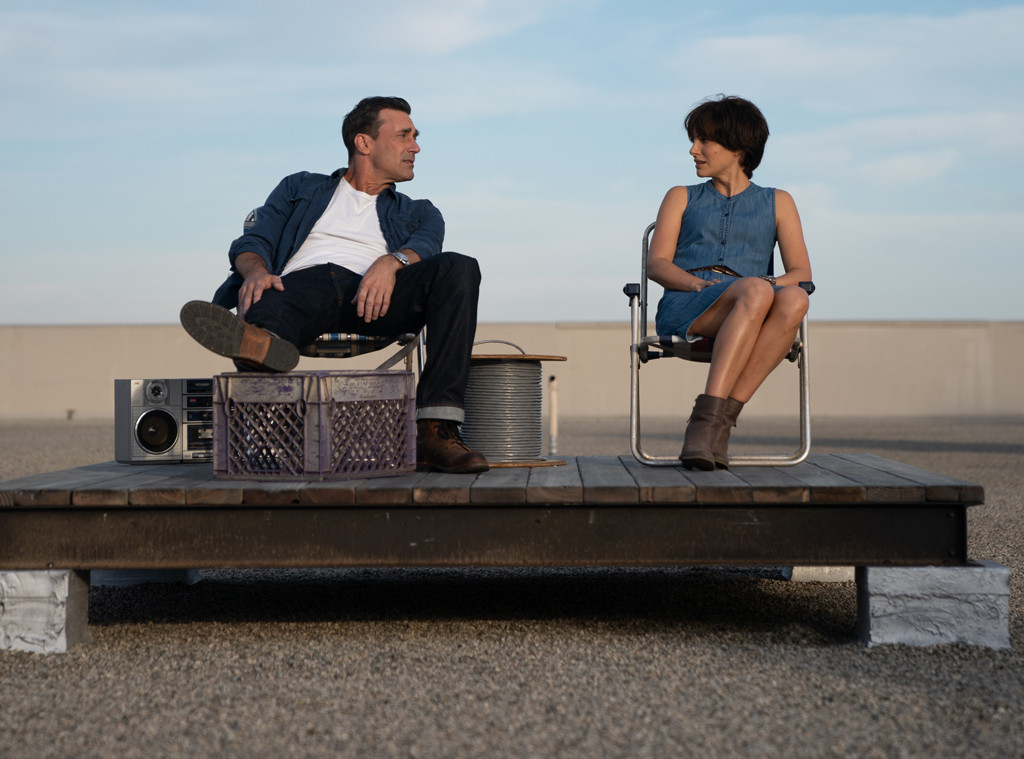 “I think the experience for the audience is going to be one of empathy,” Hawley also said, “really immersing themselves into her point of view. So even when she’s making these decisions you don’t necessarily agree with, you’re going to understand why she’s making them.”

Explaining the root of Lucy’s conflict, Hawley told us, “You take her from life or death, the risk-taking of going to space, back to earth where everything feels smaller and different. 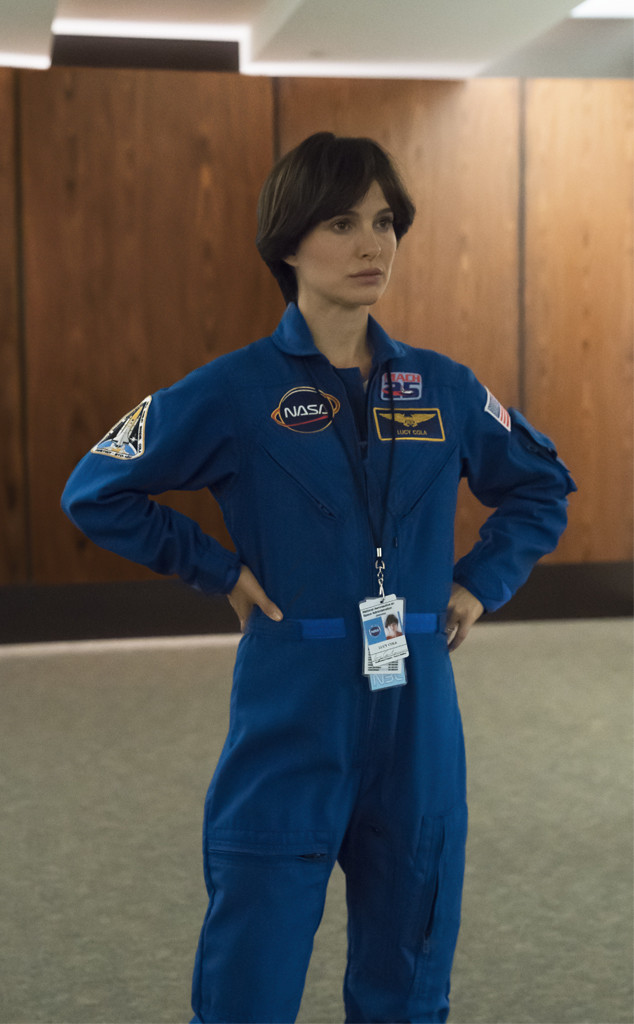 “Oh, the diaper sadness,” Portman quipped to the Los Angeles Times last month when the movie premiered at the Toronto International Film Festival. “It was an interesting detail, because it was something that seemed so radical to all of us listening to it. But actually it’s part of an astronaut’s life. They wear diapers the whole time because that’s what you do in space. It’s not like it would be an unusual choice. It seems a lot nuttier if that’s not something you do every day. But I guess I still have a diaper movie in my future to fulfill everyone’s expectations.”

Meanwhile, the diaper-enhanced nightmare that really did occur marked an incomprehensible low for a woman who had soared hundreds of miles above the earth’s surface. 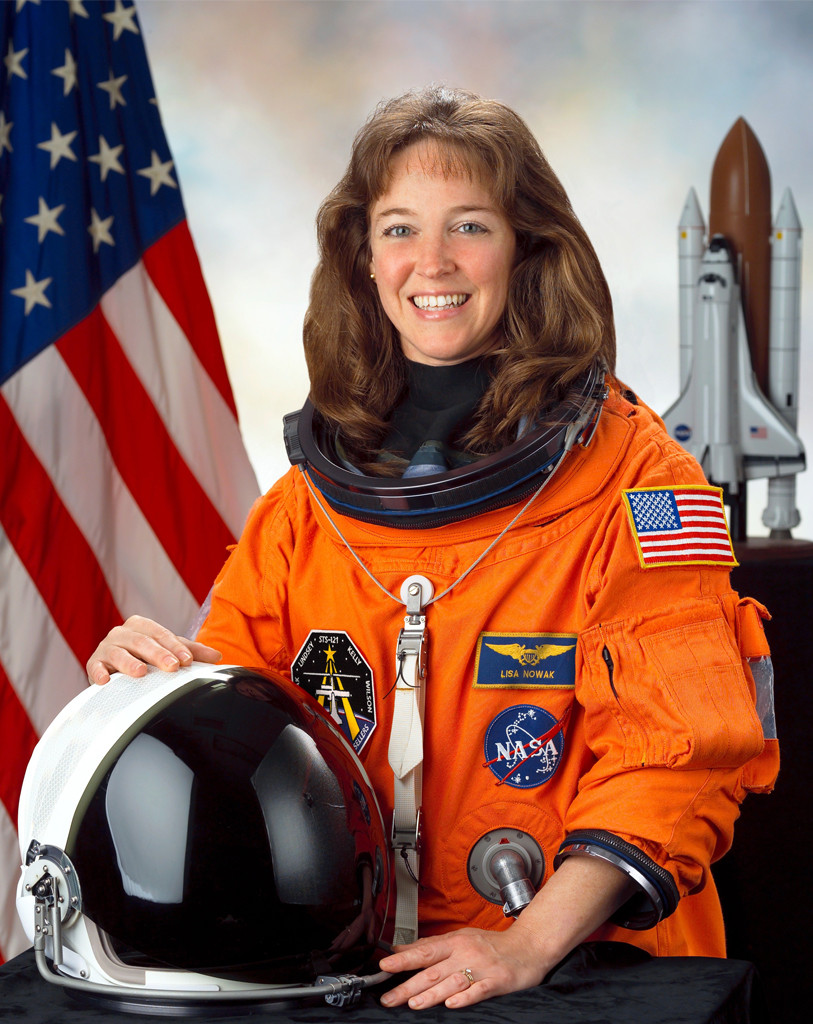 On July 4, 2006, Nowak literally had the world at her feet. The U.S. Navy captain and NASA astronaut was launched into space on a 13-day shuttle mission that, by all accounts, proved successful. Nowak was in charge of operating a robotic arm.

On Feb. 5, 2007, the married mother of three was arrested in the parking lot of Orlando International Airport for attacking Air Force Capt. Colleen Shipman—the other woman, in Nowak’s eyes, who was dating her guy, Navy Cmdr. William Oefelein, a fellow astronaut Nowak had an affair with for two years after meeting during training exercises in 2004.

Adultery, meanwhile, is a criminal offense in the U.S. military. Oefelein and his wife had divorced in 2005, while he was seeing Nowak. She and her husband separated in January 2007, right around when Oefelein told Nowak he was in love with someone else.

“She seemed a little disappointed, but she seemed to be accepting of that,” Oefelein told Orlando police later, per Texas Monthly. But Nowak did keep calling him every day, he said, being “extremely friendly and not adversarial.”

Nowak discovered who he was seeing when he was away on a mission. She accessed his apartment with the key he had given her and found emails between him and Shipman.

Shipman was in Houston to meet Oefelein upon his return, and then headed back to Orlando, where she worked as an engineer for the 45th Launch Support Squadron, on Feb. 4, 2007.

Meanwhile, Nowak had already started her drive to Orlando to be at the airport when Shipman arrived, having also found her flight itinerary on Oefelein’s computer. Oefelein had told Shipman he had recently ended a relationship with someone else.

“He didn’t mention any names or anything, and he said, ‘I had this talk with her and we’re going to remain friends. But there’s no romance there or anything,'” Shipman recalled to ABC News on 20/20 in 2011. She had joked with him, “‘Hey, is there gonna be some crazy lady showing up at my door, you know—trying to kill me?’ And, he was like, ‘No, you know, you don’t have to worry about that.'”

In her BMW, Nowak brought with her a knife, a BB gun, rubber tubing, garbage bags, a steel mallett, pepper spray and directions to Shipman’s house. And yes, she wore diapers in the car so she wouldn’t even have to stop to use the bathroom along the way. (Though having left on Feb. 3, once she got to Florida she spent the night in a hotel in DeFuniak Springs before heading to Orlando.) 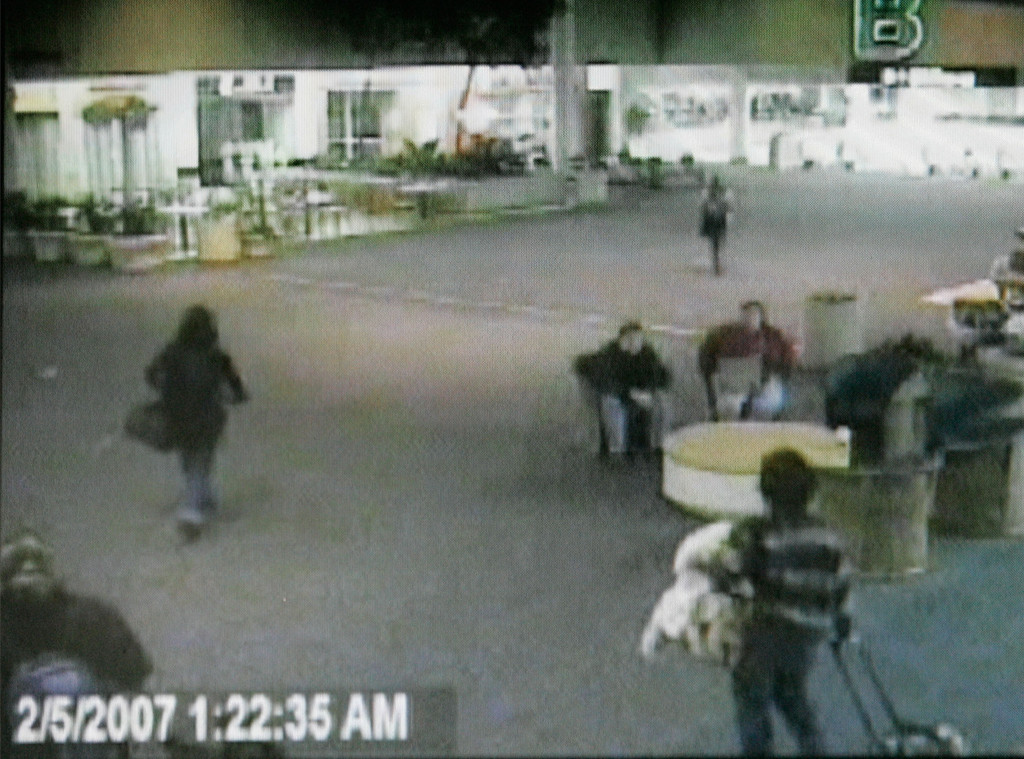 Wearing a trench coat, glasses and a wig, Nowak followed Shipman from the airport terminal onto a shuttle bus that took them to the parking lot where Shipman’s car was parked. After an attempt at a ruse to get Shipman to let her into her car failed, Nowak sprayed pepper spray into the driver’s side window.

“I really thought for sure she was going to murder me,” Shipman recalled.

Nowak was apprehended at the scene and locked up in the airport jail on suspicion of attempted kidnapping, where—as her attorney would later allege in a motion to have her statement to police and the items she had with her thrown out of evidence—she was left alone for several hours before being questioned, and police refused her request to call a lawyer.

She insisted in her statement to police that she had just wanted to talk to Shipman so they could figure out the situation with Oefelein, and she acknowledged that using the pepper spray was “stupid.”

Orlando police filed a charge of attempted murder against Nowak the next day. She was released on bail with an electronic monitoring ankle bracelet and ordered to stay away from Shipman. Her status at NASA was placed under review.

In 2008, a judge ruled that the items found in her car were admissable as evidence, but that what she told police during six hours of interrogation was not; the judge agreed with her attorney that they had taken advantage of the fact that she hadn’t slept in 24 hours.

Accounting for appeals, delays and the courts not being in any rush, Nowak ultimately pleaded guilty in 2009 to misdemeanor battery and felony burglary of an automobile. Facing a possible six years in prison, she was sentenced to a year of probation.

Per Reuters, she apologized to Shipman in the courtroom at the judge’s request to turn and face her. “I am sincerely sorry to cause fear and misunderstanding and all of the intense public exposure,” Nowak said. “…I hope very much that we can move forward from this in privacy.” 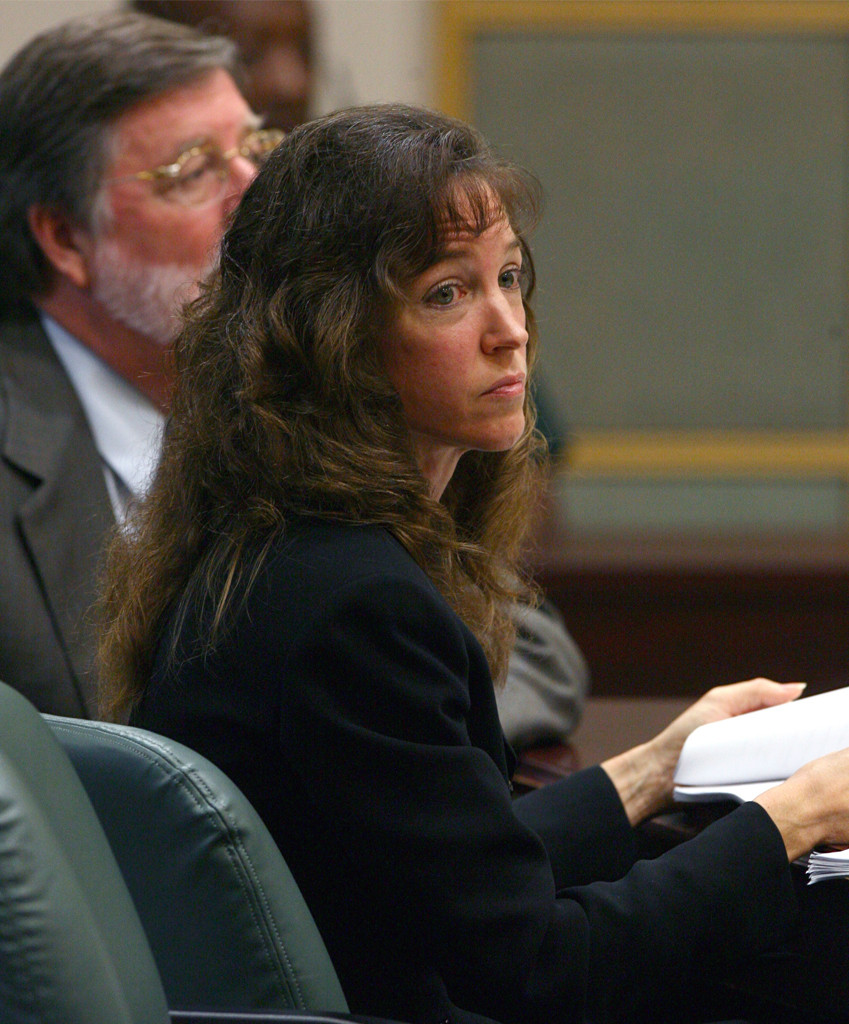 Nowak was fired by NASA in March 2007 (the first time a NASA astronaut was publicly fired) but had remained on active military duty, working for the Navy in Texas.

By 2009, when Nowak entered her plea, she was divorced from her husband Richard. Oefelein, who retired from the Navy in 2008, and Shipman got married and moved to Alaska.

The following year, a Navy board of inquiry in Jacksonville, Fla., voted 3-0 that Nowak should be discharged from the Navy for reasons “other than honorable; she was also demoted to commander, a blow to her retirement benefits.

Nowak had a number of colleagues who supported her throughout the legal proceedings. Some said at the time, per USA Today, that she never fully got over losing friends in the 2003 Columbia explosion and had been under intense stress, which possibly could have affected her behavior.

Lucy in the Sky delves into the effects of going into space on the psyche, with Portman’s Lucy saying at one point, “I just feel a little off. You go up there, you see the whole universe, and everything here looks so small.”

Nowak, a mother of a son and twin daughters, remains in Texas to this day, working in the private sector and staying out of the public eye. Oefelein and Shipman still live in Alaska and have a son together.

“It was absolutely debilitating,” Shipman told Inside Edition in 2017 about her ordeal—which she previously said had caused her to develop migraines and other physical ailments that prompted her to leave the Air Force. “I didn’t leave the house for a six-month period at one point. To this day, I’m always armed. I am armed all the time, 24/7.”

But she declared herself happily married to Oefelein. “I call him the best husband ever, because he is,” she said. “And I tell him every day. He makes me laugh every day.”

“I was really adamant that A, this not be a story about a woman who falls apart because she’s too emotional about a man,” Noah Hawley told USA Today. “The affair is just a symptom of this larger existential crisis she’s having. And B, this was a way to remind an audience that behind a tabloid story are human beings with dignity, who have made mistakes, who maybe ruined everything, and have been turned into a punchline. The goal of the movie is an attempt to return that dignity.”

He continued, “I wanted to be very aware of not giving the audience an excuse to mock her or to stand in judgment of her. I don’t want to parade her out into the public square for people to throw tomatoes at her. I want people to understand that this story is a tragedy.”